The High Performance Computing Center (HPCC) of the Lithuanian National Center of Physical and Technology Sciences (NCPTS) at Faculty of Physics, Vilnius University

The HPC is renewed as Vilnius University HPC center of two parts: http://www.supercomputing.vu.lt/en/homeen/

“HPC Sauletekis” is devoted for needs of researches of Vilnius University, Physical Technology Research Center and other Lithuanian research institutions. One of the main goals is to strengthen the Lithuanian users of HPC, to enable high impact scientific discovery and engineering research and development across all disciplines, to stimulate Lithuanian users in Physical and Technological Sciences to participate in common European research projects using more advanced European RI such as PRACE (Partnership for Advanced Computing in Europe).

“HPC Sauletekis” was created for material science, quantum chemical, astrophysical and other high resources demanding research. The main feature of “HPC Sauletekis” is that all resources of the cluster may be used for one up to several weeks lasting task.

Supercomputing resources may be used by any not only Lithuanian user according to the rules of public access centers of Vilnius University.

“HPC Sauletekis” is a part of research infrastructure of National Center of Physical and Technology Sciences of Lithuania. Infrastructure was funded by European funds and created at 2006 and 2011. 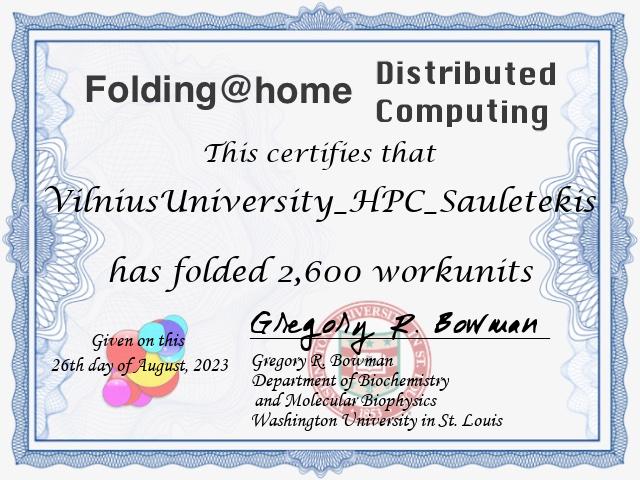